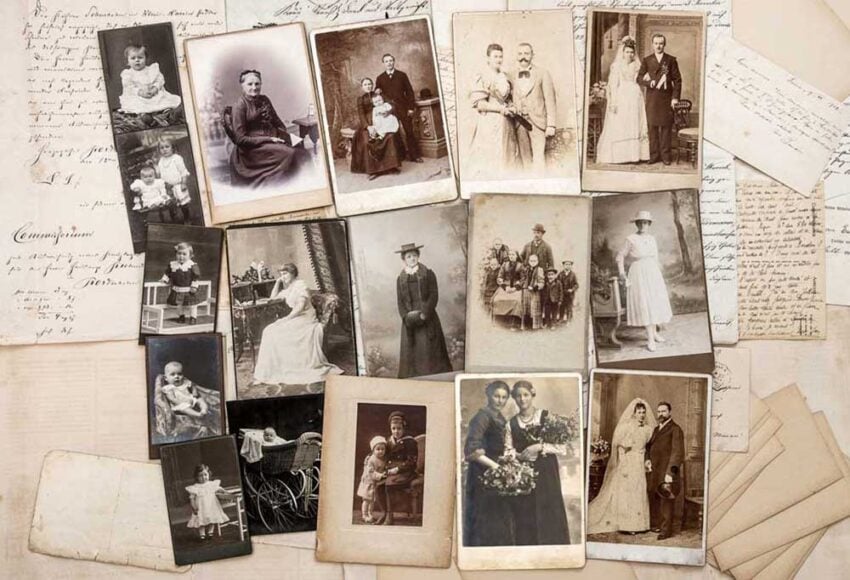 When we look back at old family photos, the first things we usually notice are the people in the photos and how much they have changed through the years, but what about the photos themselves? Some, like the Cabinet Card may have a heavy cardboard type backing while other more recent photos are on a thinner paper. Some photos even look shiny when held in the light. But did you know that by knowing the different types of old photographs, it can help you discover the estimated age of a photo?

What are the Oldest Photographs

Though there are older photos than what I am listing here, and other types of photography, these are the types you will most likely come across in your genealogy searches.

Daguerreotypes were the first publicly available type of photograph. Popular from around 1840 to 1860, these images were created on silver plated copper sheets that were made light sensitive and exposed in a camera, then treating it with a mercury vapor and other chemicals. The finished photograph was then sealed behind glass to protect the easily scratched surface. Daguerreotypes, can appear to look like either a positive or negative image depending on the angle you view it.

Ambrotypes – popular from about the mid 1850s to 1860s, Ambrotypes were created through a collodion process on glass. Once developed, the glass would be mounted on black paper so that the image could be viewed. Though Daguerreotypes can appear as a positive or a negative, the Ambrotype appears as a positive image from each angle it is viewed.

Tintypes photos were produced on a thin sheet of iron painted in a black varnish. With their highest popularity being during the 1860s and 1870s, these type of photographs were still being made until the 1930s. Since the process of making a tintype was faster and made a sturdier product, photographers were not limited to a studio, allowing a more wide variety of subjects.

Now that you know some of the types of photos you are dealing with, there are several ways you can investigate the age of a photo. Hairstyles, clothing styles, the type of photograph. and the subject of the photo can all be clues to how old a photo is. If the photo is a card photograph, look for any stamping or writing on the cardboard backing. A lot of card photos were stamped by the photographer with their studio name and location. This timeline on Wikipedia shows how card photographs and their markings changed from 1866 – 1890s.

Unfortunately, you may never know if that is Great Aunt Tess in the photo you have on your mantle. Photographs were a special treat to most as it was an expense not everyone could afford. A group photo could be celebrating the visit of a long lost relative, a wedding, or a family reunion, and there wasn’t always documentation saying who was in the photo.

How I like to tackle this problem is first by making a copy of the photo onto paper that I can write on without destroying my original image. Then I write in the names on the copy image of the people in the photo that I do know. I then look at the time period of the image. Where was this taken? Are the people I do know in the image related? Could this be a family gathering? Do I have other photographs of these same people? Were there any post cards or letters stored with this photo that could give me some clues?

If you still find yourself hitting a brick wall, try sharing the photo with some of your family elders. They may be able to solve the mystery for you or at least point you in the right direction.

Please keep in mind that when you click our links and make purchases, we may receive a small commissions. This does not impact our reviews and comparisons as I try my best to keep things fair and balanced, in order to help you make the best choice for you.