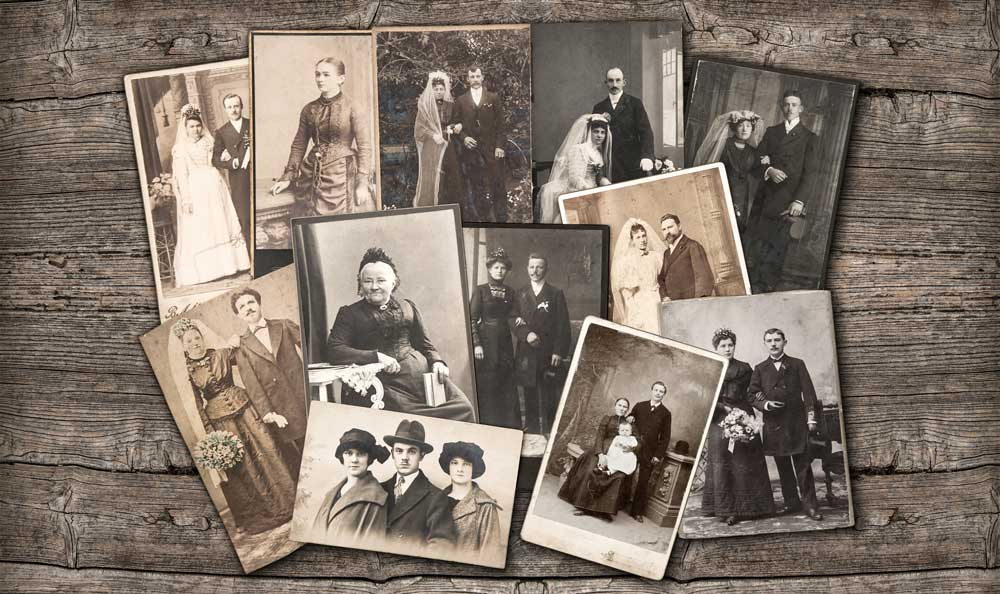 Every family tree seems to have that elusive ancestor that just doesn’t want to be found. My family tree has several.

On my mother’s side of the family, I have had a wealth of information handed down to me. Photos, previous family trees (some not so correct), books about famous family members, and even a book about the county most of my family comes from.

Even with all theses documents, I’ve hit a few brick walls. But nothing like the brick walls I have hit my father’s side of the family.

When I started this journey, I really did not know anything about my father’s family, other than every Sunday afternoon we made an appearance at my Grandmother’s for a visit. His siblings lived far away, so there were no cousins on his side for us to play with. While my parents talked to my grandmother and step-grandfather, us children were banished to the yard to run around, chase the dog, and make noise.

For years I assumed my dad’s biological father had passed away when my dad was young. My grandmother was remarried, and I knew her husband was my step-grandfather (that had never been a secret), but where was my grandfather?

My family tree on my father’s side consisted of him and his siblings, his mother, and then nothing. My grandmother would not talk about her family or upbringing and as far as she was concerned, my grandfather did not exist. My dad never spoke of his biological father and when asked, named his stepfather as his dad. My uncles would only say that their father was dead. I only had one person left to ask, I got brave and called my aunt.

The phone call was the jackpot I had hoped for. She could not provide his birthday or marriage dates, but she did point out to me that I already knew my grandfather’s name since one of his sons was a junior.

My aunt was also willing to read her birth certificate to me over the phone and tell me when and where each of her siblings were born. This was a great start!

What do I know about my ancestor?

When researching my family history, I feel a bit like a detective. You take what clues you have and make the most of them. From the conversation with my aunt  (who was the oldest child), I now knew my grandfather’s full name, where he was the years my father and his siblings were born, the approximate year he left, his wife’s name at the time (my grandmother), and that he was older than my grandmother by a good many years.

This gave me several strong leads. I now had to decide where to start looking.

The first thing I did was make a list that included all of the details I had learned plus everything I already knew from observation.

Now it was time to start looking at these clues and creating a plan of attack. What information could each one of these clues give me, and where could I find the information?

I then wrote a list of things I wanted to know about my grandparents and any questions I had.

Soon I realized, I had a lot of questions.

I searched not only by name, but armed with my aunt, uncles’, and dad’s birth places and years, I searched by location.

By searching this way, I was able to find my grandparents. They were married and living in Virginia with 2 of their 4 children just 2 years before my father’s birth.

I now had an average marriage year and according to my aunt’s age on the census, she was born within their first year of marriage.

Where do you find marriage records?

We all know that you cannot just start a genealogy project and then walk away. I finally had proof that my grandfather was in fact a real person who had really been married to my grandmother, but I needed to know more.

Now that I knew the approximate year for their marriage, and that my aunt was born shortly after they were married, I wanted to see their marriage license.

Unsure of where to look for this marriage license, I started with google and came across my state’s vital statistics website and found where you could order a copy, but it was from more recent years and did not go as far back as I needed.

On a whim, I decided to write to the clerk of court for the county where my aunt was born. I was hoping that just maybe they could tell me where to look.

In the email I included not only my grandparent’s full name, but the approximate year I thought they had married and an explanation of who I was and why I was looking for these marriage records.

The reply I received was unbelievable.

If these people are your grandparents, then that makes us cousins. Give me your mailing address and I will send you a copy.

Could it really be that simple? I was in disbelief. There was no way (especially with my bad luck) that this was going to be the marriage records of the people I was looking for, but I gave her my mailing address, and then waited impatiently for the records to come.

On the day that the records arrived, I was nervous. What if it really wasn’t the correct records? Where would I look from here? Finally, brave enough to open the envelope, I was stunned to find it in fact was the marriage license of my grandparents, and I now have a cousin I never knew about willing to help with my search.

From this marriage license, I learned the actual date of my grandparents’ marriage, their ages, and that my grandmother was a ward of her aunt and uncle who signed consent for her to marry.

Now I had even more questions than when I started, and it was no longer just about my grandfather. Why was my grandmother being raised by her aunt and uncle?

My leads were stacking up. I now had a notepad full of questions and details I could prove as facts. I signed up for a paid subscription to ancestry.com and got to work.

It was a bit harder than I thought it would be.

I now had my grandfather’s full name, approximate year of birth, I knew who he had been married to (at least while they were married), his children’s names, his occupation, and where they had lived.

But evidently his name was common. A search of ancestry’s databases showed no less than 7 men with his same name, born in various months of the same year. Now I had to prove not only who he was, but that these other men were not him.

One of my searches gave me the divorce decree of my grandparent’s but it provided little information that I did not already have, other than they did in fact divorce and the year that they did. This opened a new set of questions. I knew that my grandmother remarried, but did my grandfather? According to the divorce decree, he stayed in Virginia, or at least was there when the divorce was final. Did he die there also?

My search results on Ancestry contained a lot of World War 2 draft cards (registration cards) but I did not know how, without a birthday, I was going to prove which one belonged to my grandfather. Each card had a name, address, birthday, place of birth, a person who would know where you are, where you were employed, and a signature. I did not know his birthday, where he lived, or even where he was employed. What on this card could I prove?

I had his signature! On the bottom of my grandparent’s marriage license, was his beautiful and very distinct signature.

I started comparing the signature I had to the signatures on the draft cards, and eureka! I found one card that the signature was a perfect match. I had found my grandfather’s birthday.

Marriage records for a second marriage

I began a new search now, one that contained better information, and as a result found that my grandfather had in fact remarried when he was in his 50’s. A bonus, his parents’ initials were listed on this marriage license along with where they were born.

I was ecstatic. My family tree was growing, and I was getting even more clues as to who this side of my family was.

What is listed on a death certificate?

When I came across my grandfather’s death certificate, it made me a little sad to find he had been living up until just 3 years before I was born. My parents would have been married 10 years at least by then, my older siblings already born. How could he not have been involved with his children for all of these years?

I struggled with my feelings about this. I questioned if I really wanted to know about this man or claim him as my family. I finally had to set aside my research and do some soul searching for a while before I could move on.

Deciding that if not for this man (whether I liked him or not), I would not be here, I pulled out my research and began again. That break allowed me to realize that even if I was unsure of my grandfather, he had parents and possibly siblings that I would like to know about.

I took a closer look at his death certificate. It had the usual name, date and time of death, his spouse and address. It also had his cause of death, that he was an Army veteran, and his last occupation, but the information that really got my attention was, right there typed on this green document, were his parent’s first names. Finally, after all this time, I could add my great grandparents to my family tree.

Now that I have my great grandparent’s names, where they were born and who at least one of their children were, I have been actively searching for any information on them. I look at every detail I can find in hopes that I have breakthroughs like I did with my grandfather.

I may never find them, or I could find a wealth of information, but I don’t plan on giving up any time soon. These people are part of me.

The search for this one man opened doors and opportunities that I never imagined. I have been able to extend my family tree not only through my grandfather, but have also found my grandmother’s family, a long list of cousins that I never knew, and the hope to connect with more.

When you hit a brick wall, don’t give up! Look at details even if you think they are not important. You never know where that one small lead may take you.

And as always, enjoy the journey!

Please keep in mind that when you click our links and make purchases, we may receive a small commissions. This does not impact our reviews and comparisons as I try my best to keep things fair and balanced, in order to help you make the best choice for you.